Searching for some GoDaddy hosting alternatives for your website?

While GoDaddy is certainly a popular hosting provider, you’ll find mixed reviews when you read how real users feel about GoDaddy.

The hosting space is quite competitive with lots of great options, so there’s no reason to stick around with GoDaddy if you’re unhappy. In fact, you’ll find plenty of hosts that can offer a similar (or better) service for around the same amount of money.

In this post, I’ve collected three of those services, which just so happen to be our three recommended shared hosting providers.

For each alternative, I’ll also share some thoughts on what it does better than GoDaddy, as well as where it doesn’t quite match up.

Why Consider a GoDaddy Alternative?

By the numbers, GoDaddy is the most popular web hosting provider in the world. While it’s hard to know GoDaddy’s exact market share, BuiltWith puts it at ~18% and Datanyze has it at ~17%. Long story short, a lot of people use GoDaddy.

But there are tons of reasons why a host might be popular (for example, Super Bowl commercials), and popularity alone doesn’t mean quality.

If you look up GoDaddy reviews on Google, you’ll see some troubling similarities between a lot of the negative reviews (of which there are a good number):

If you’ve never experienced issues with any of those things, you might not need to switch. But if you do have complaints in those areas (or anywhere else), I think that you can find better web hosts for a similar price.

That last qualifier is important — in creating this list of alternatives, I tried to look for hosts that can improve on those weak points at a similar price point.

Obviously, if you have the budget for it, you could go with a premium managed WordPress host such as Flywheel, WP Engine, or Kinsta. These three hosts offer a vastly superior product…but they also cost a lot more than GoDaddy, which is why I did not include them on this list.

Instead, I picked hosts that are around the same price as GoDaddy, just with superior support, performance, and features.

What GoDaddy Plan Are You Currently Using/Considering?

Another important consideration in choosing a good alternative is which GoDaddy plan you’re already using (or considering using).

On the other hand, if you’re just looking at the shared plans, you might be happy with any shared host.

Ready to go? Let’s check out the alternatives…

This makes them a great alternative for both GoDaddy’s shared and managed WordPress plans.

SiteGround has put a lot of work into continually improving their hosting product, recently launching a custom hosting dashboard and moving to Google Cloud infrastructure for all of their hosting plans.

They also offer managed WordPress features such as:

For their price, SiteGround offers excellent performance. As I mentioned, they now use Google Cloud infrastructure and add on top performance optimizations such as server-level caching and a companion SG Optimizer plugin that helps you implement a number of WordPress performance best practices.

You can also get support via live chat, ticket, and phone. I personally use SiteGround and have found the support to not only offer quick response times, but also actually solve any problems that I have. I always use live chat — I’ve never tried the phone support, so I can’t speak to that channel.

SiteGround offers three pricing tiers — you can see the details below: 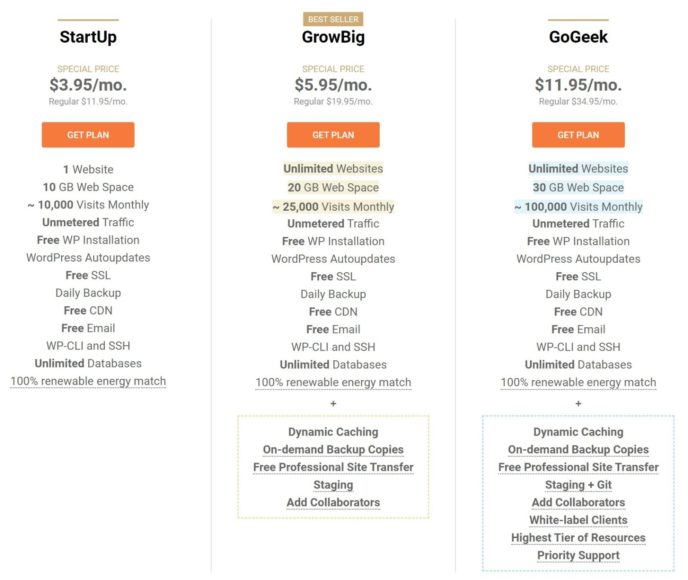 In terms of performance, features, and user experience, I think SiteGround surpasses GoDaddy in all categories:

Basically, excluding price, SiteGround just plain offers a superior hosting product. But…price might be important to you, which brings me to my next point.

The big disadvantage of SiteGround is that SiteGround’s regular non-promo prices are more expensive than GoDaddy’s regular prices.

When you first sign up for SiteGround, you get an attractive promo price. But after your first billing cycle (which can be anywhere from one to three years), your monthly price will roughly triple.

So SiteGround is cheaper, right? Well, yes…until you have to renew.

Basically, if you choose SiteGround, you need to pay attention to SiteGround’s renewal prices and try to lock in the promotional prices for the full three years if you can afford the upfront cost. 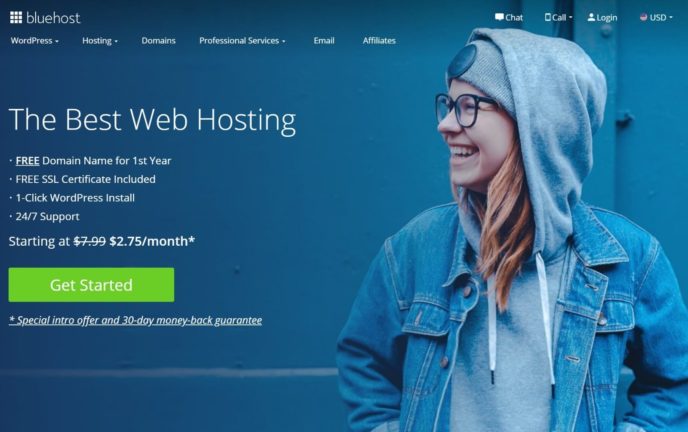 Though Bluehost aren’t quite as popular as GoDaddy, they’re definitely another one of the world’s most well-known hosting companies.

However, unlike GoDaddy, Bluehost has done an excellent job of building a great user experience even on their cheap shared plans. While Bluehost does still give you cPanel access like GoDaddy, they’ve also built their own custom hosting dashboard on top that makes it a lot easier to work with your website.

Bluehost has also added helpful features such as staging and free SSL certificates to even their cheapest shared hosting plans, which is another thing GoDaddy does not offer.

If you’re looking for cheap shared hosting, Bluehost’s regular prices are quite similar to GoDaddy, though Bluehost offers larger promotional discounts for your first billing cycle: 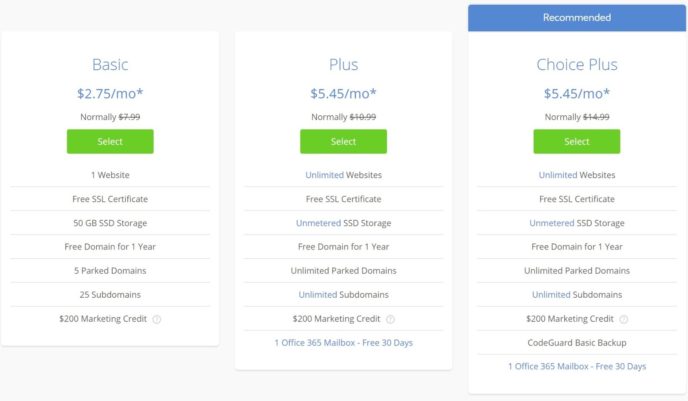 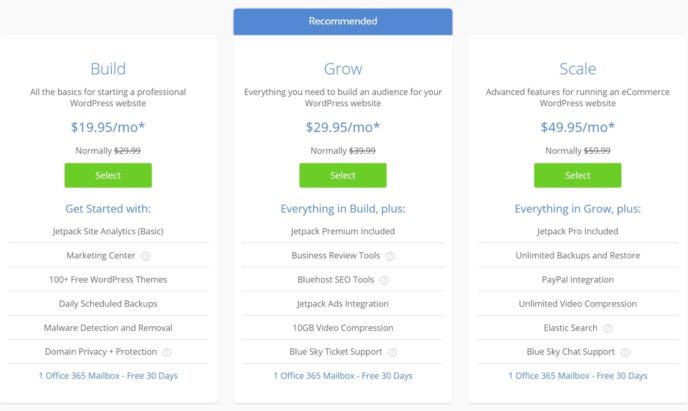 I think the big advantages of Bluehost vs GoDaddy are the user experience and features.

First, you get the custom hosting dashboard on top of cPanel, which makes it more pleasant to manage your sites on Bluehost.

For example, even on Bluehost’s cheapest shared WordPress hosting plans, you’ll still get features such as:

Just as people complain about GoDaddy’s performance and support, you’ll also find many of those same complaints about Bluehost’s offerings.

For example, while GoDaddy’s support received a 3.3 in that CodeinWP survey, Bluehost’s support actually scored lower at 3.2.

So if the biggest reason that you’re moving from GoDaddy is their support and performance, you might want to go with SiteGround or DreamHost (the next host on this list). 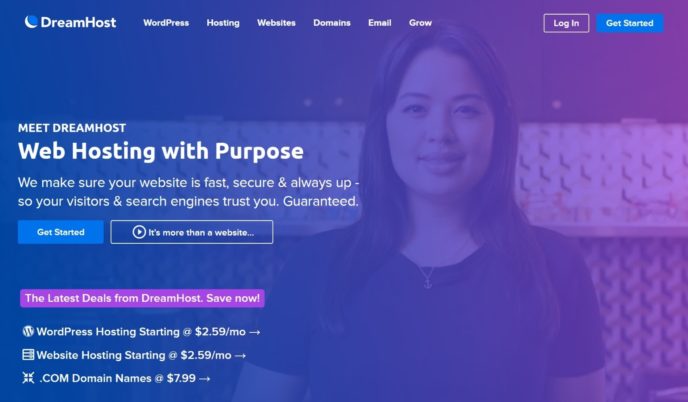 DreamHost are a well-established web host that’s been around since all the way back in 1996.

No matter which plan you go with, you’ll get access to a number of helpful features such as:

DreamHost’s shared hosting plans start at just $2.59 with a three-year commitment or $4.95 with month-to-month billing: 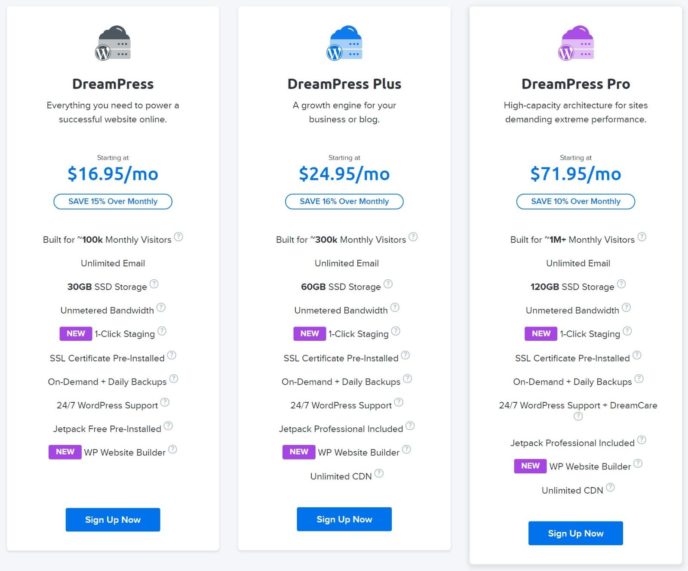 One big advantage of DreamHost over GoDaddy (and the other alternatives on this list) is the pricing. Not only are DreamHost’s prices affordable and transparent, but they also are one of the few hosts to offer month-to-month billing on cheap shared plans.

With GoDaddy, the minimum commitment is three months, which has an inflated price vs the yearly plans. On the other hand, DreamHost lets you pay month-to-month while still keeping the price low.

GoDaddy does offer an automatic backup service on its shared plans, but it’s an extra $2.99 per month.

In terms of support quality, DreamHost beats out GoDaddy. But DreamHost doesn’t beat GoDaddy when it comes to availability. DreamHost offers 24/7 ticket support, but live chat support is only available from 5:30 AM to 9:30 PM PT.

In contrast, GoDaddy’s support channels are all open 24/7. This is something to consider if you prefer live chat support and live somewhere where DreamHost’s hours aren’t convenient for you.

Which Is the Best Alternative for You?

At this point, you should hopefully have a good idea of which GoDaddy alternative is right for you.

If not, here’s a quick summary to guide your choice:

Used/using any of these GoDaddy alternatives? Thoughts?

Colin Newcomer is a freelance writer and long-time Internet marketer. He specializes in digital marketing and WordPress. He lives a life of danger, riding a scooter through the chaos of Hanoi.