Ariele Lite Is a Fun and Refreshing Theme for WordPress Bloggers

Ariele Lite Is a Fun and Refreshing Theme for WordPress Bloggers 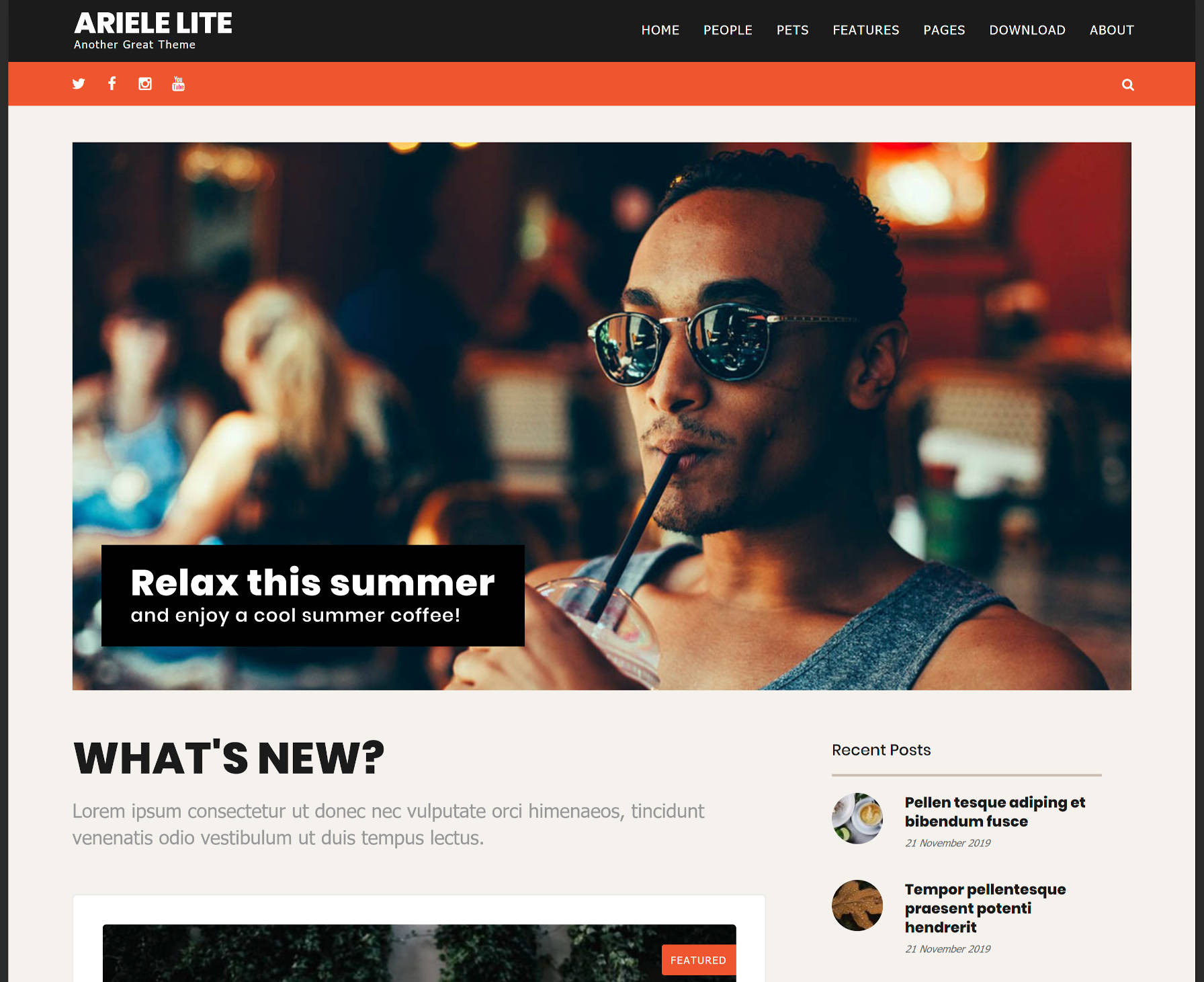 Ariele Lite, the latest theme from Rough Pixels, went live in the WordPress theme directory today. In an ecosystem where designers are dubbing most themes as multipurpose, it is refreshing to see a well-designed theme that is unafraid to cater specifically to bloggers.

It is not often that I get the opportunity to test a brand new theme from the official WordPress theme directory that supports block editor styles. Or, at least it’s not often that I test one that lives up to the claim. Despite a couple of trivial issues, Ariele Lite is a theme that will appeal to a wide audience.

Whenever I see the word “lite” appended to the end of a theme name, it is immediately off-putting. Far too often, I have been burned when activating such themes. My already low expectations are generally met with unfulfilled promises, missing styles for basic features, and a metric ton of advertising for the real product (i.e., the non-lite version that I can buy). However, I was pleasantly surprised by the work that went into Ariele Lite. It was a complete and fully-functioning theme and did not feel like crippleware. Plus, most of the upsell features in the commercial version were not that appealing to me. I can find most of them in plugin form. However, they could be nice additions for the user who wants integrated features that will look and feel like they are a part of the theme without the hassle of hunting down the perfect plugin.

What makes Ariele Lite a great theme is that it has an opinionated style, even if it is merely some subtle flavoring, for nearly every element or block. It never goes overboard into lavishness, which means it doesn’t break readability. It is a theme that has fun with its design while being well-groomed enough for professional bloggers.

Even if Ariele Lite is not to your taste, Rough Pixels has a history of releasing clean, well-designed themes. There is a little something for almost anyone. The company is also one of the few theme-makers with multiple themes that support the block editor in the free directory. 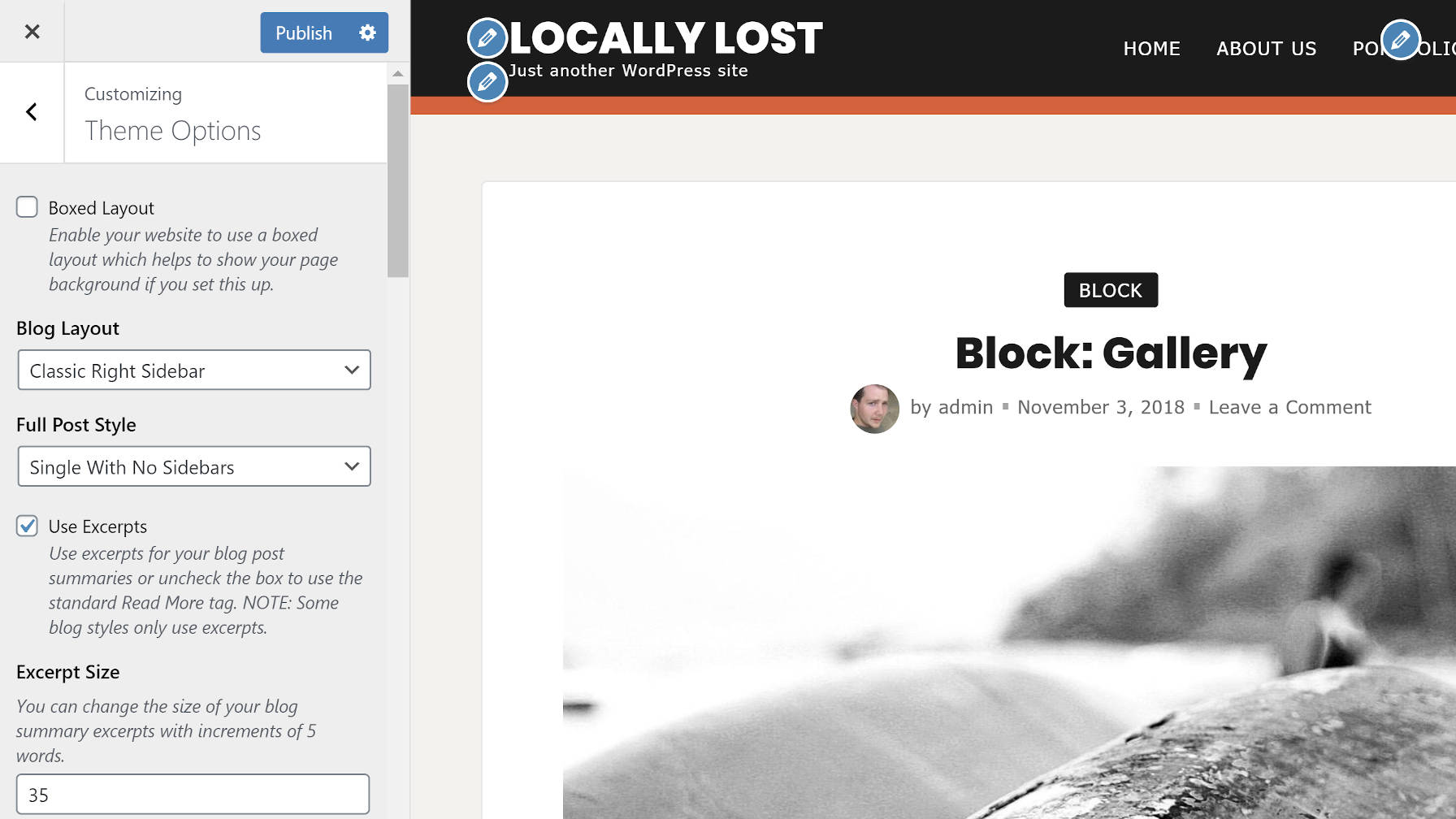 Ariele Lite is not stock full of custom features, but it has enough flexibility to satisfy most people who want to do some customization. More than anything, my favorite thing about the theme is that it does not take much cajoling to achieve the look of the demo the theme author has put together. There should be a WordPress theme directory filter tag titled “what you see in the demo is what you get.”

The theme comes with a reasonable number of theme design options. Users can change nearly every aspect of their front end. The theme has options for all its colors, several labels, and other theme-specific elements. It stops short of adding font settings, which is likely a good thing given the theme’s attention to detail with typography.

The one particular design element that caught my eye was the theme’s blockquote style. Some bloggers may want something a bit less pronounced in design, depending on how they want to present quotes. However, I am a sucker for beautiful quote designs, and Ariele Lite did not disappoint.

The quote design is representative of the attention that Rough Pixels has given to other elements in the theme. From the bold headings to the caption design that overlays the featured image, the team has left few stones unturned.

For bloggers, the most important element is the typography. It is one of those elements that too many theme authors overlook, but it is paramount when catering a theme to bloggers. This is one area the theme excels at. However, if selecting the sidebar-less layout option, there are too many characters per line for comfortable reading. Stick with either the left or right sidebar option to stay on point.

The theme comes with Jetpack infinite scrolling support, a custom posts widget with thumbnails, and enough sidebars to put widgets anywhere you might want. I like the default setup well enough, so these features are less important to me. However, they are likely welcome additions for many users.

I have been building this theme up thus far in the review. Now, it is time to take it down a notch or two. Ariele Lite is by no means perfect. No software is. I hit a few snags.

The biggest issue I ran into was the theme did not handle full-aligned blocks well. Instead of capping them to the width of the content container, they would break out into the sidebar. Even when selecting a layout with no sidebar, the same issue persists.

This would be an absolute deal-breaker for me as a user. As a developer, I know that it is simply an oversight and can be corrected. The theme author can correct it with a single line of CSS. Users should simply be aware of the problem, at least until the theme author has a chance to address it.

Outside of that, nested lists in sidebars need a little TLC. The spacing is off. It is also missing support for pagination via the <!--nextpage--> quick tag on single post views.

These few items are relatively trivial issues to address. They are worth noting for the 1.0.4 version of the theme and will likely be fixed in future iterations.

Ariele Lite does not break much new ground. It is simply a solid blogging theme that supports the block editor. Nearly two years in, such themes are still few and far between. It is ideally suited for people who love to write, and it has enough options to keep those who want to do a bit of tweaking happy.

If the theme’s development team is proactive about addressing the few minor issues, I would recommend it to anyone who wants a good theme that fully supports the latest version of WordPress.